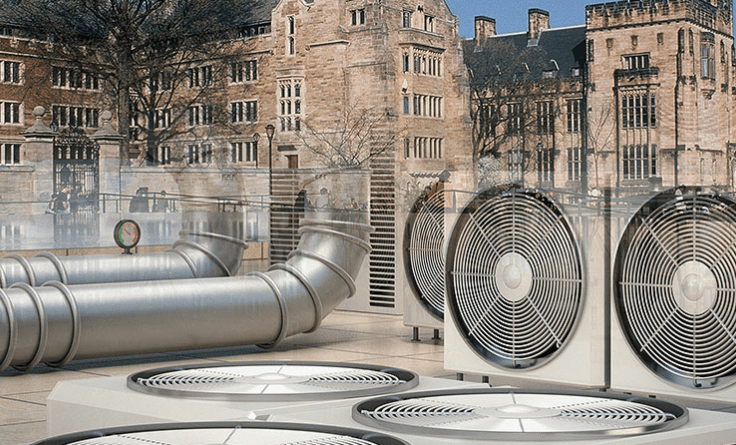 Bill and Melinda Gates Hall at Cornell University required a suitably thoughtful HVAC selection and design process. After considerable analysis (CFD and otherwise), the team arrived at an unusual strategy led by chilled beams (both active and passive) and DOAS, with key dehumidification elements to keep spaces comfortable.

The solution — a combination of active and passive chilled beams, energy recovery systems, and a host of other sustainable measures — helped contribute to a 30% lower energy use over ASHRAE 90.1-2007 and the building’s quest for LEED Gold.  Heating for the building was provided via fin tube radiators and radiant floors. Before the new 100,000-sq-ft campus icon opened its doors in January 2014, the Syska Hennessy Group design team employed the latest design tools and techniques and performed complex engineering analyses to ensure the HVAC systems provided appropriate IAQ, dehumidification, and excellent thermal comfort through controlled air movement and uniform air temperature distribution throughout the facility.

Both active and passive chilled beams can provide a variety of benefits.

Chilled beam systems have gained traction in the U.S. as of late, after successful implementation in Europe for many years. Using water as the primary cooling medium, chilled beams are known for their efficiency (water holds more cooling capacity than air and therefore has a more efficient heat transfer capacity), their delivery of good IAQ, and thermal comfort and minimal maintenance requirements.

One of the keys to designing a chilled beam system is ensuring proper dehumidification. Primary air consisting of either 100% outside air or a mix of return air and outside air (typically higher than minimum outdoor air requirements) is delivered to the active chilled beam from the air handling system (DOAS in the case of a 100% outside air system). The primary air system providing outdoor ventilation air to the chilled beam must maintain the dew point of the indoor air below the surface temperature of the chilled beam to avoid condensation. For this reason, chilled beam systems will often work better in less humid climates. However, when designed correctly, they can successfully heat and cool any space.

The high internal computer load at Bill and Melinda Gates Hall led MEP designers to initially specify only passive chilled beams for the majority of the building’s spaces. However, the team realized early on that the passive chilled beam capacities weren’t enough to overcome the high heat dissipation from the workstations. They would need something more.

Passive Chilled Beam Systems. The Passive Chilled Beams (PCB) act as radiators/convectors chilled by recirculated water. Warm air from heat gain at a perimeter wall typically rises to a high level or into a ceiling void where it passes over the chilled beam, is cooled, and gently drops back down into the space, keeping the perimeter zone comfortable for occupants. The PCB system has no primary air connection (thus its passive nature), so a separate ventilation system is needed to bring dry, fresh air to these spaces and to offset latent heat gains as well. PCBs provide effective and reliable cooling of perimeter spaces as the heating load through the perimeter glazing amplifies the air buoyancy effect, thereby increasing the chilled beams cooling capacity and effectiveness. Manufacturer recommendations for PCB capacities are listed as up to 400 Btuh/LF or a cooling effect of 40 Btuh/FT2. The design team at Bill and Melinda Gates Hall found that the project specific capacities were on average 300 Btuh/LF or 35 Btuh/FT2.

Active Chilled Beam Systems. In order to achieve higher cooling capacities to overcome the heat dissipation in a concentrated workstation environment, the use of active chilled beams was explored as well. The Active Chilled Beam (ACB) system is composed of units consisting of a horizontal finned cooling coil, primary air duct, induction nozzles, and linear diffusers — all within a manufactured casing. Primary outdoor ventilation air passes through the casing duct, discharges through induction nozzles, and mixes with room air that is induced to pass vertically over the horizontal cooling coil to mix with the primary air and deliver conditioned air to the occupied space. The active chilled beam components are very similar to those used in perimeter induction systems, but inverted for a ceiling distribution operation. Since they combine the coil sensible cooling capacity with the ventilation airflow, the sensible cooling per cfm of supply air is three times that of all air systems (when primary air is of similar temperature). Manufacturers list ACB capacities up to 600 Btuh/LF or a cooling effect of 70 Btuh/FT2. Real-world project-specific capacities at Gates Hall were less — similarly reduced as the passive beams capacities, yet significantly higher and therefore capable of covering all but a few high-density spaces. The average ACB capacities were calculated to be 500 Btu/LF (coil only) or 750 Btu/LF with primary air. The cooling effect was approximately 35 Btu/FT2 (coil) or 52 Btu/FT2 with the required primary air.

The final design solution for Gates Hall was a dual chilled beam system — an innovative engineering feature that employs the use of both PCB and ACB systems in the same spaces. In rooms with high cooling loads, the engineering team found that by combining higher cooling capacity ACBs with PCBs at the perimeter, the appropriate balance of cooling and ventilation airflow was achieved. Classrooms, small conference rooms, and computer labs were provided with active chilled beams. Perimeter and interior offices were provided with passive chilled beams in conjunction with a VAV system delivering minimum ventilation air.

The combination of active and passive chilled beam systems within the same space is relatively unique, and therefore airflow patterns had to be analyzed to ensure success during design. One of the main concerns was protecting the movement of air in the perimeter zones with the PCBs. If the active beams were placed too close to the perimeter zone, their horizontal airflow throw could disrupt the natural buoyancy of the air in the perimeter zone, and therefore reduce the passive beams cooling capacity and effectiveness. To mitigate this concern, the active chilled beams were placed in a pattern perpendicular to the perimeter, with the airflow discharging parallel to the passive beams, rather than towards them (Figure 1).

CFD modeling was also performed for air movement verification in the smaller spaces where the systems could potentially clash with each other. Parametric CFD modeling informed the design team of the appropriate location for ACBs to minimize airflow interference in the space with PCB. Manufacturer data with airflow throws were used for each space, as each space was individually modeled and chilled beams selected accordingly. In the small internal offices, for example, where only one passive chilled beam was used, design engineers employed CFD modeling to determine the best location for the chilled beam in relation to a structural beam and the ventilation supply grille (Figure 3).

Positioning the chilled beams is just one of the design considerations when specifying such a system. The other — even more critical — is dehumidifying the space to keep it comfortable and free of condensation.

In a chilled beam system, air supplied to the space must satisfy the following conditions: Be dehumidified to a level low enough that it can absorb all the moisture (latent load) in the space. As described above, this typically means sub-cooling and reheating the air (reheating via energy recovery). It needs to be able to remove 100% of the latent and sensible load of the outdoor air. And third, the supply air needs to provide the minimum ventilation requirement for the occupants. A properly designed DOAS helps meet all these required conditions. It provides 100% outdoor air and controls, relative humidity without overcooling, and provides energy recovery (see “Energy Recovery Process Considerations”).

In a chilled beam system, air supplied to the space must satisfy the following conditions: Be dehumidified to a level low enough that it can absorb all the moisture (latent load) in the space. As described above, this typically means sub-cooling and reheating the air (reheating via energy recovery). It needs to be able to remove 100% of the latent and sensible load of the outdoor air. And third, the supply air needs to provide the minimum ventilation requirement for the occupants. A properly designed DOAS helps meet all these required conditions. It provides 100% outdoor air and controls, relative humidity without overcooling, and provides energy recovery (see “Energy Recovery Process Considerations”).

There are two common DOAS discharge air/dewpoint control strategies: Low temperature/low dewpoint or “cold air” strategy (55?F DB/50-55%rh) and the “neutral air” strategy — thermally neutral but dry air (68-72?F DB/ 50-55% RH). When “neutral air” is supplied, the dehumidified air is reheated at the unit to introduce fresh air into the space at room-comfortable conditions. Due to the lower supply air temperature, less space sensible cooling capacity is available. Since Gates Hall has a high sensible cooling load, the low temperature/low dewpoint “cold air” strategy was implemented. The air was not reheated at the unit; instead, it was supplied at the temperature of the cooling coil. In this case, the outdoor air was able to handle some of the sensible cooling in the space and in the process, decreased the sensible loads assigned to the chilled beam coils. Use of energy recovery wheels in DOAS provided sensible and latent energy recovery upstream of the DOAS cooling coil and thus eliminated the need of sub-cooling the primary air.

Energy recovery systems typically incorporate heat exchange equipment to reduce energy costs by extracting heat from the facility’s exhaust air stream before it is vented outside and subsequently repurposing it to precondition outdoor ventilation air. In hot weather season, the bottom part of the desiccant-coated energy wheel absorbs humidity and heat from the outdoor air. Cooler, drier air leaves the other side of the wheel, passing through chilled-water coils before being circulated throughout the building. Exhaust air drawn from the building picks up heat and humidity from the top part of the rotating wheel. In colder weather season, the process is reversed.

Two different types of energy recovery wheels were considered for incorporation into the air-handling units at Gates Hall: an enthalpy wheel and a desiccant wheel. A sample of significant spaces were analyzed psychrometrically under both wheel type conditions. The desiccant wheel was found to require the smallest amount of outside air in order to overcome the space latent heat gain. However, desiccant wheels did not offer sensible heat recovery. To achieve a balance between the latent and sensible heat recovery, enthalpy wheels were deemed more suitable to the project.

In order to lower the amount of primary air required from the enthalpy wheel, a room design rh of 53% was found to be acceptable (from the initial 50% rh ) while maintaining the same dewpoint temperature of 51?F (see Figure 4).

Today, after a year in operation, Cornell’s Bill and Melinda Gates Hall features a unique dual chilled beam strategy that cools and successfully dehumidifies the interior spaces where students and faculty work together. But, like a real textbook lesson, the exam here was the process by which the HVAC design was born and tweaked to earn its passing grade.

The Nose Knows About Aeroseal

When decomposed bodies are found in Monterey County, Ohio, they... Read More 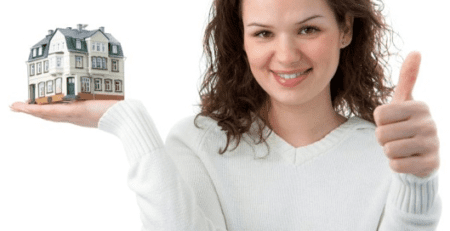 Indiana Homeowner Saves Over $600 Thanks to Aeroseal

For homeowner Denise Roberts, winters in Indiana were not only... Read More 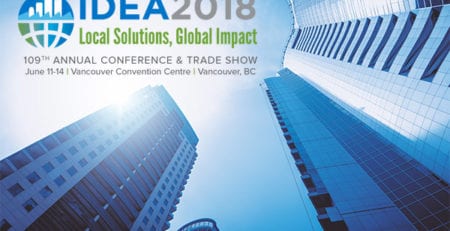 We are headed to Vancouver, Canada. Later this summer, we... Read More

It’s that time of year! We are gearing up for... Read More 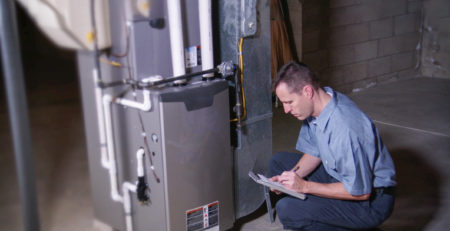 When to Hire a Contractor Instead of DIY

The following article is written by Pranay Velichety from the... Read More