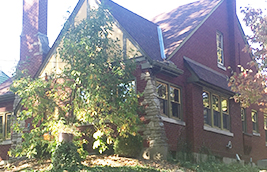 BEFORE AEROSEAL:
760 CFM of leakage

AFTER AEROSEAL:
46 CFM of leakage

Putting window air conditioners in her upstairs bedrooms was simply an ongoing summer ritual for Susan T. a homeowner living in Cincinnati, Ohio. Though she had central air conditioning, enough cool air from the main unit never seemed to make it up to the second floor of her two-story brick home. When her old boiler system died, she decided it was time to replace both the heating and cooling units of her home. She told the HVAC pros at Hader Solutions that topping her wish list was more comfort and lower energy bills.

After a quick inspection, the technician explained that today’s air conditioners offer higher efficiency, but getting that efficiency requires ductwork that can effectively deliver the treated air to all the rooms in the house. The problems she had getting cool air upstairs was a good indication that her ducts were leaking. He told her he had a new technology that could easily fix that problem.

Rather than trying to find and seal all the leaks by hand, Hader used an aerosol sealing technology called Aeroseal that works from inside the ductwork to find and seal leaks. In less than a day, the seal team reduced Sue’s duct leakage by 95 percent. She immediately felt the difference.

Since having her home aerosealed, Sue has given away her window air conditioners. She just doesn’t need them anymore – the second floor is now comfortable year-round. She has also seen her energy bill go down by more than 40 percent. As an added bonus, Sue found that the duct sealing cut the time she spent dusting down to almost nothing.

“Once they explained to me how leaks in the ductwork can affect the performance of my central air conditioner, having my ducts repaired and sealed was a no brainer. With the computerized Aeroseal system, the process was really fast. I could actually watch the computer monitor and see the leakage rate drop as the sealant did its job.”

“I’m on an even billing program with my utility company. I used to pay $275 a month for gas and electric. Since the new HVAC equipment has been installed and my ducts have been sealed, my monthly bill is now $159 a month. That savings will quickly pay for all the work that was done, and I have a more comfortable, cleaner home year-round. I would recommend Aeroseal to anyone looking for more comfort and lower energy bills.”
Susan T.,
Homeowner

“New equipment simply won’t deliver its high-efficiency potential when connected to a leaky, inefficient duct system. We find Aeroseal is especially helpful in eliminating the uneven temperature issues that so many people have. And since it pays for itself over a short period of time, many of our clients choose to do it when they buy their new equipment.”