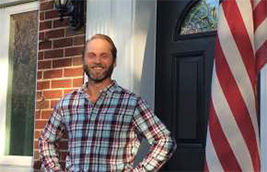 BEFORE AEROSEAL:
390 CFM of leakage

AFTER AEROSEAL:
26.2 CFM of leakage

Ever since Erik B. moved into his Pittsburgh-area home, he and his family struggled to get enough heat and air-conditioned air to all the rooms in the house. No matter how he set the thermostat, some rooms remained uncomfortable during hot summer days and cold winter nights. He first tried insulating his home to solve the problem, but that did little to help. He then noticed that air was blowing stronger out of some of the vents than others. Internet research led him to information about the role duct leakage often plays in robbing homeowners of comfort and energy savings.

He also found information about a new approach to duct sealing that works from the inside of the duct system to find and seal all the leaks – not just those on the outside, easily accessible by hand.

After a call to his local Aeroseal dealer, Aeroseal of Pittsburgh came to his home, free of charge, and tested his ductwork for leakage. Results indicated that while his energy-efficient furnace and air conditioner were working properly, he was losing nearly 390 CFM of treated air through duct leaks. According to computer calculations, all of the little leaks added together were the equivalence of a 54 square inch hole. Erik decided to have the ducts cleaned and the leaks aerosealed shut.

On the scheduled day, the Aeroseal team arrived in the morning, laid down drop cloths in the intended work area, and began by cleaning the duct system. By early afternoon, they had cleaned and prepared the ductwork for sealing. It took about one hour to seal the entire duct system. At the end, the computerized Aeroseal process generated a report that showed that leakage was reduced by more than 90%. More significantly, Erik immediately felt the difference with strong air coming out of vents throughout his home. As a bonus, he calculated that he would now be saving $300 -$500 year on his utility bill.

“The temperatures throughout my home have felt much more balance since they were aerosealed. The force of the air coming from the problem vents has increased substantially, and my furnace and AC now run less to better heat and cool the house. The team at Aeroseal of Pittsburgh was professional and highly respectful of my home. I would definitely recommend Aeroseal if you are looking for increased home comfort.”

“Erik’s story isn’t unusual. Most of the homes we test in this area have leakage rates in excess of 20% – an amount that really makes a difference in indoor comfort and energy usage. With Aeroseal, you can easily reach and seal the entire duct system, not just the small fraction of exposed ducts that you may be able to seal by hand. It usually takes us less than a day to clean and seal an entire home.”