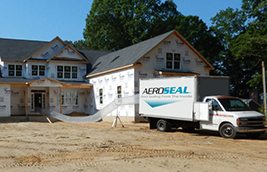 RESULTS:
In less than 4 hours and without demolition, Aeroseal of Rochester was able to seal the duct system and exceed code requirements.

City Inspectors Amazed By The Amount Of Leakage Remaining After Manual Sealing; And The Ease And Effectiveness Of Using Latest Breakthrough In Duct Sealing Technology

It was near end of day when duct sealing specialist Dan Rollie received a call from a building contractor looking for assistance. Before the GC could get sign off on a new house he was building, he had to show that the leakage rates of newly installed ductwork did not accede 70 CFM. With the home nearing completion, newly hung drywall and other obstructions made accessing and sealing the duct system impossible without demolishing much of the work that was just completed.

When Dan pulled up in his Aeroseal of Rochester utility truck, the general contractor and the city inspectors were waiting. Neither the GC or the inspectors had ever witnessed the aerosol sealing process before and they wanted to see this innovative procedure for themselves.

It took Rollie about an hour to set up the sealing equipment and prepare the ductwork. The computerized Aeroseal system took a measurement of the pre-aeroseal leakage rate and the inspectors were surprised to see that, despite manual sealing, the 500+ CFM leakage meant that the home wasn’t anywhere near meeting code. Rollie explained that while the city requires sealing around duct connections, he’s found that there is typically excessive leakage throughout the ductwork, even where sealing is required.

Once setup was completed, it took Rollie about a half hour to seal the house. Since aeroseal sealing works from inside the ducts, no demolition was required to find or seal the leaks. The inspectors watched the equipment monitor to see the leakage rate plummet to less than 25 CFM – well below code requirements. The inspectors quickly signed off on the project and the home was completed on schedule.

“When you factor in the true cost of manually sealing and testing, aerosealing the ductwork in newly constructed homes is the way to go. Not only can it lower costs, but it is faster and more effective than traditional sealing methods. It can be applied any time after the ducts have been installed so it provides unparalleled scheduling flexibility. And since it monitors the sealing process as its working, you know the results right away. No need to call in a third-party to retest – the system generates a final report with the before and after results.”